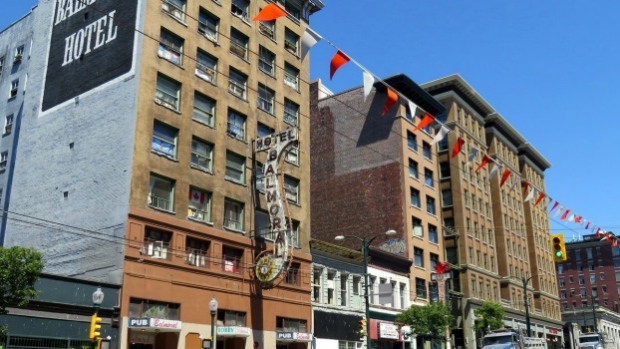 A new SFU study finds many in the Downtown Eastside migrated to the troubled neighbourhood from elsewhere. (Sean Marshall/UBC)

By with files from Stephanie Mercier, CBC News

Vancouver’s Downtown Eastside, which is often associated with despair, poverty and addiction, now has a grim new claim to fame.

According to a study conducted by UBC, marginalized residents of one of Canada’s poorest neighbourhoods, are dying at a rate more than eight times the national average.
Study co-author Dr. William Honer says researchers were surprised to discover that psychosis and Hepatitis C-related liver dysfunction were the main factors leading to the higher death rate, not drug overdoses or HIV.

“Most people thinking about the Downtown Eastside think about HIV/AIDS or the possibility of overdosing on opioids like heroin,” said Horner, head of UBC’s Department of Psychiatry.
■UBC study published in British Medical Journal

“Our system is not doing as well in getting treatments out there for psychosis and Hepatitis C in this group, and it’s interesting that those two illnesses are causing risk for early mortality.”

During that period, 31 participants died, a rate 8.29 times the national average when adjusted for age and sex.

The study claims that two-thirds of participants living with HIV were receiving anti-retroviral treatment, while not a single person with active Hepatitis C was receiving treatment.

Only one third of the 173 participants diagnosed with psychosis were receiving treatment.

“We need to improve the detection and treatment of psychosis and Hepatitis C in marginalized people across Canada.”