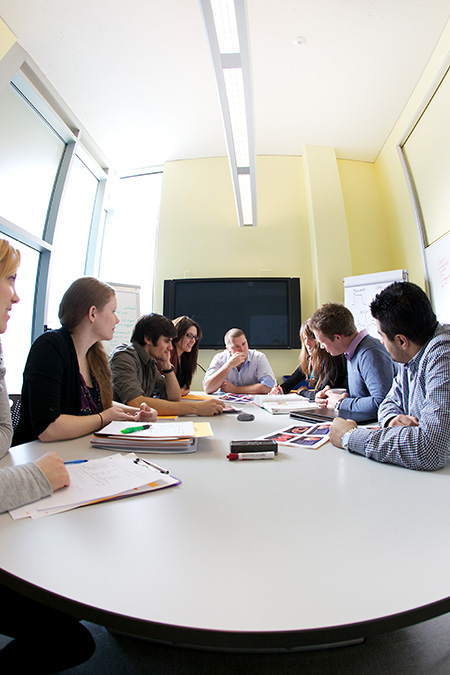 When the UBC medical class of 2019 arrives on campus in this month, they will immediately have to take a multiple choice test. And probably all of them will fail it.

No, this will not be some hazing for first-year students. Instead, it will be the first in a series of “progress tests” – one of several new innovations being introduced as part of the Faculty of Medicine’s renewed medical curriculum.

The progress tests, each one covering the full range of material that MD students are expected to master over four years, will be given twice a year.  As the students make their way toward their degree, their performance on these exams – which initially won’t count toward students’ grades – should improve.

“That first test won’t carry much significance,” says Geoff Payne, the Director of Assessment in the MD Undergraduate Program. “But at subsequent points, we’ll be able to say, ‘Here are the things you’re doing well, and here are areas where you’re not doing so well – so either you need to pay more attention, or we need to do a better job of teaching it.”

The progress tests speak to a fundamental principle of the renewed curriculum: The path to becoming an MD should not be a passage through a succession of seemingly disconnected learning experiences, otherwise known as “learn it and leave it.”

Rather, new knowledge should build upon what has gone before. Students should appreciate the relevance of each topic and its place in the wider body of knowledge.

“We used to sit students down in big lecture halls and give them lots of information without helping them connect the dots,” says Maria Hubinette, the Family Practice Course Director in the Vancouver Fraser Medical Program. “We’re trying to make those transitions smoother for students by organizing the information in a better way.”

With that guiding principle, the smaller blocks of material that have dominated the medical curriculum will morph into “spirals”: themes, systems and clinical experiences that recur across all four years. Material taught in the foundational sciences such as anatomy, histology, physiology and genetics will be resurrected, at increasing levels of complexity, across all four years, while simulation exercises and immersion into clinical contexts will be introduced right from the first year.

“In the third and fourth years, we will return to the foundational material they learned in the first two years,” says Dave Snadden, the Executive Associate Dean, Education. “We will say, ‘Remember when you were learning X and we said it was really important, but you didn’t quite know why at the time? Now we’ll show you why.’ And the students will have those ‘A-ha’ moments.”

As with any curriculum revamp, new enhancements must be offset by sacrifices, because there is only so much time. In the renewed curriculum, students won’t cover a particular topic – such as health advocacy, growth and development, medical ethics, genetics and genomics, diagnostic imaging, or pharmacotherapy – in a single concentrated dose. Instead, each topic will be broken up, integrated and distributed over the duration of the four years.

“To do this developmentally, we need a common road map, so each instructor knows what every other instructor is doing,” says Sandra Jarvis-Selinger, who until this spring was the Director of Curriculum for the MD program. “To avoid repetition, instructors need to know what students have already learned, and what students will be learning later. There will have to be many more effective hand-offs.”

With fewer blocks and more integrated, wider-ranging courses, there will be fewer but more comprehensive written exams. Workplace-based assessments will continue, but there will be more of them, and they will be expanded into Years 1 and 2, covering not just clinical decision-making and differential diagnoses, but an ability to work in teams, communicate effectively and think critically.

Other features of the renewed curriculum include:

As these educational ideas are put into practice, the curriculum designers are prepared to make ongoing adjustments. Communication among instructors, for example, will have to be robust enough to ensure that the spirals live up to their promise.

“We’re going to learn a lot in the first few years of the renewed curriculum,” Dr. Snadden says. “With the last curriculum renewal 15 years ago, it took three to five years before we really had it down. I expect we’ll be facing a similar learning curve this time. That makes people nervous. But it should also excite them, because it shows that we’re not operating on auto-pilot – we’ll be examining everything we’re doing in real time, and responding to what we see and hear from students, staff and faculty.”