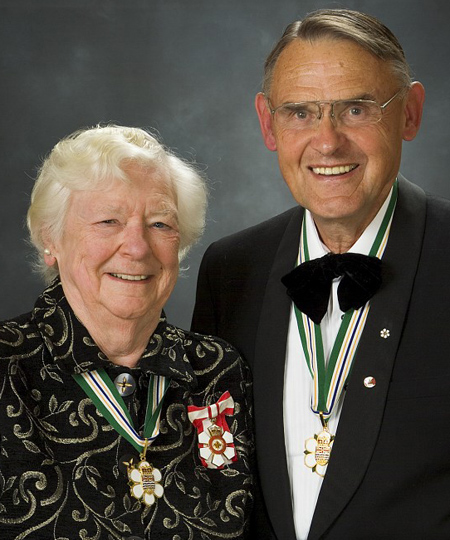 Professors Emeriti Edith and Patrick McGeer have been recently honoured as 2015 Fellows in The National Academy of Inventors (NAI). The NAI has named 168 leaders of invention and innovation to Fellow status. Those inducted bring the total number of NAI Fellows to 582, representing over 190 research universities and governmental and non-profit research institutes.

Drs. Edith and Patrick McGeer are among the leading researchers on Alzheimer’s and other neurodegenerative diseases. They are among the world’s top 100 most highly cited neuroscientists, beginning their work at UBC since 1954.

Election to NAI Fellow status is a high professional distinction accorded to academic inventors who have demonstrated a highly prolific spirit of innovation in creating or facilitating outstanding inventions that have made a tangible impact on quality of life, economic development, and welfare of society.

They will be inducted as NAI Fellows on April 15, 2016, as part of the Fifth Annual Conference of the National Academy of Inventors at the United States Patent and Trademark Office (USPTO). USPTO Commissioner for Patents Andrew Hirshfeld will provide the keynote address for the induction ceremony. In honor of their outstanding accomplishments, Fellows will be presented with a special trophy, medal, and rosette pin.