Electrical stimulation as a treatment for psychiatric conditions is fraught with disturbing images of patients in grim psychiatric hospitals being forcibly strapped to tables, undergoing convulsions, and emerging as shadows of their former selves.

Contrast that with the electrical stimulation being applied by Fidel Vila-Rodriguez, an Assistant Professor of Psychiatry:

Sean Tajadod sits at a table as two electrodes are strapped to his head, held in place by a cloth cap. The electrodes are attached to a small device the size of a smartphone, powered by nothing more than two AA batteries. When it is turned on, Sean just sits there – no shaking, no loss of consciousness. In six minutes, it’s over.

“I was feeling a tingling sensation where the electrodes are,” Tajadod said. He called the sensation “strange at first, but then I got used to it, and I didn’t feel it anymore.”

Then, as if to underscore that this is a kinder, gentler form of neurostimulation, Tajadod changes into shorts and a t-shirt, enters an adjoining room, and spends the next 30 minutes in a one-on-one yoga session.

Need for another treatment

Tajadod was participating in one of several studies being conducted by Dr. Vila-Rodriguez, aimed at assessing the efficacy of lower voltage electrical current or targeted magnetic pulses to treat a variety of conditions, especially depression. If his and others’ studies show a benefit, it could add a third major intervention for depression, alongside talk therapy and medication.

“In the field of depression, over the last 50 years we’ve come a long way,” says Dr. Vila Rodriguez, a member of the Djavad Mowafaghian Centre for Brain Health. “A lot of people get better with the two main treatments of psychotherapy and anti-depressants. However, about 30 to 40 per cent of people do not. So there is a need for other approaches, and neurostimulation – which can be done in an outpatient setting, in less than an hour – could provide hope for a lot of people. Neurostimulation might also be effective in addressing symptoms of depression that neither talk therapy nor antidepressants seem to effect, such as cognitive impairment.” 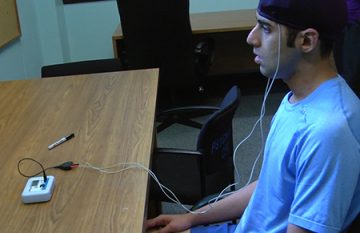 Transcranial direct current stimulation, which is what Tajadod received from that smartphone-sized device, is aimed at manipulating the “membrane potential” of brain cells – how easily they are able to go from a negative charge to a positive charge.

Depression is believed to result from an imbalance of electrical activity between the left and right sides of the dorsolateral prefrontal cortex, at the front of the brain. The left side is hypoactive, whereas the right side is hyperactive.

“That hyperactivity is linked to negative rumination,” Dr. Vila-Rodriguez says. “When you’re struggling with depression, you tend to have a lot of negative thoughts that play over and over in your mind that are very difficult to put to the side.”

Transcranial direct current stimulation (tDCS) seeks to prime the brain cells on the left side of the dorsolateral prefrontal cortex so they are more easily stimulated, while doing the opposite to the right side. As a treatment, it’s still in the experimental stage, with evidence that it can benefit some people, with minimal side effects.

Dr. Vila-Rodriguez is seeking to add to the body of evidence, but with a twist: Because studies have shown that tDCS’s effectiveness is highly dependent on a person’s neural state, he is exploring a combination of tDCS and yoga, an activity widely credited with healthier brain waves, heart rate, blood pressure, respiration and sleep.

“If we can design an intervention that is able to tackle those difficulties, and put the brain in a stage where people are able to be more present in the moment and put aside those negative thoughts, it’s going to have a really strong clinical impact for people with depression,” he says.

At the beginning and end of each session, their brain activity is measured with an electroencephalogram (EEG), which assesses brain waves, and with near-infrared spectroscopy (NIRS), which measures oxygen consumption by brain tissue. 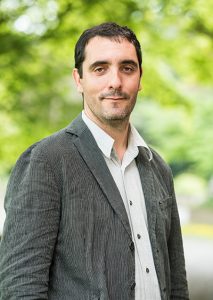 Even though the participants don’t have depression, Dr. Vila-Rodriguez says positiveresults from the EEG and NIRS data would justify a clinical trial using people who are actually diagnosed with the condition.

The power of portability

Meanwhile, he is pursuing several other related studies. With colleagues at the University of Toronto, he is exploring different versions and doses of transcranial magnetic stimulation, which is farther along than tDCS in demonstrating its efficacy with depression and has been approved by regulatory authorities in the U.S. and Canada for people who don’t respond to talk therapy or anti-depressants.

tDCS, however, has an advantage over magnetic stimulation – it’s a relatively simple, portable electrical device. Dr. Vila-Rodriguez is conducting another study that capitalizes on that portability, investigating whether tDCS can alleviate depression in people with Parkinson’s disease. Participants bring home a programmed device and affix the electrodes themselves, running current for 20 minutes at a time for 15 consecutive days.

“Right now, with the yoga study and the Parkinson’s study, we’re imposing a rhythm,” Dr. Vila-Rodriguez says. “But we’re learning that it’s probably going to make a huge difference if we’re able to enhance a set of rhythms instead of bluntly applying stimulation.”