Dr. Weihong Song featured in Newsweek “Alzheimer’s Disease Might Start in Our Bodies, Not Just Our Brains”

Alzheimer’s disease as we know it is impossible to prevent and nearly impossible to detect early—but what if we’ve been looking for the answers in the wrong place?

We associate Alzheimer’s with physical deterioration in the brain, but new research shows the nerve damage responsible for Alzheimer’s onset might actually originate outside the brain, as a cascade of breakdowns that begin elsewhere in the body. The findings could open a whole new pathway for research into the devastating degenerative neurological condition.

The brains of Alzheimer’s patients exhibit an excess of a protein called amyloid-beta, which coalesces into “plaques” that disrupt neurological function. Until now, scientists have generally believed that deposits of amyloid-beta found in the brain originate in the brain. But the protein can be synthesized in peripheral tissues anywhere in the body. Researchers just didn’t know what, if any, role this circulating amyloid-beta might play in the development of Alzheimer’s.

Keep up with this story and more by subscribing now

In a year-long study, a team of Canadian and Chinese scientists surgically joined healthy mice to mice that had been genetically modified with high concentrations of amyloid-beta. Then they monitored the mice’s brains for signs of the Alzheimer’s disease-associated plaques. After a year, the healthy mice developed the same telling neurological symptoms as the genetically modified mice. The research was published today in the journal Molecular Psychiatry. 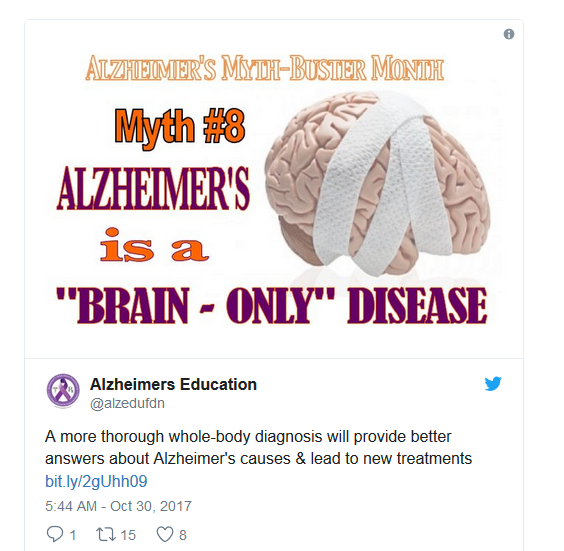 The study’s authors theorized that since the cell walls separating our blood vessels from our brain’s gray matter become weaker as we get older, the amyloid-beta in our bodies could cross over into our brains, making them a catalyst for dementia.

“Alzheimer’s is absolutely a brain disorder,” said co-author and University of British Columbia psychiatry professor Dr. Weihong Song. “I still think everything has to go through the brain, but [we can see now] there’s a balance between outside and inside the brain, because of the blood barrier.”

Song and his colleagues believe their study is the first to demonstrate that amyloid-beta originating in the bloodstream can spread to the brain and bring on the neuron deficits that cause Alzheimer’s. This means instead of trying to devise treatments and attempts at early detection that focus solely on the brain, which is notoriously difficult to study, researchers can extend their search to the body’s other organs.

Alzheimer’s affects more than 5 million Americans, but can only be officially diagnosed via autopsy, meaning there’s no real means of detecting it while the patient is even alive, let alone in an early and potentially more treatable stage. By testing for high concentrations of amyloid-beta in the bloodstream, researchers might find a way to catch it before it ever reaches the brain.

“Human study is tough,” Song said. “But we can examine [living] people with peripheral disorders, who are being treated for their kidney or their liver, looking at those symptoms. I can’t say it’s in two or it’s in three years there will be a treatment…but in the future there could be drugs designed to attack the peripheral side.”