Congratulations to Dr. L. Yatham on being awarded the 2018 Colvin Prize for Bipolar Mood Disorder Research

Lakshmi N. Yatham, Professor in the Department of Psychiatry and Director of the UBC Institute of Mental Health, has been recognized for his outstanding achievements in 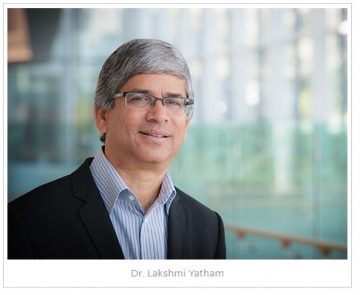 As one of the world’s most highly cited researchers in psychiatry/psychology by Clarivate Analytics, Dr. Yatham’s major research interests include neurobiology and treatment of bipolar disorder and major depression.

Using brain imaging, his research has provided important insights into the role of brain chemicals such as dopamine in mania and serotonin in the mechanisms of action of antidepressant treatments. His research has also demonstrated the benefits of early intervention in halting or reversing brain changes and cognitive impairment in bipolar disorder, and he is currently researching how medications can be used to treat cognitive impairment. As a lead investigator and collaborator for many international clinical trials on bipolar disorder, his work has contributed to the approval of a number of new and effective treatments for the condition.

Dr. Yatham is actively involved at a national and international level in continuing medical education and public education on the diagnosis and treatment of bipolar disorder. He is the Chair of the Bipolar Group of the Canadian Network for Mood and Anxiety Treatments (CANMAT) – an organization of academic and clinical leaders in depressive, bipolar and anxiety disorders. Since 2005, he has led the publications of CANMAT’s guidelines for bipolar disorder and their updates, which are widely used around the world for treatment of the condition. He also sits on the editorial boards of a number of journals including Bipolar Disorders, World Journal of Biological Psychiatry and the Journal of Affective Disorders.

Dr. Yatham has received a number of awards during his career including the Michael Smith Foundation Senior Scholar Award, the NARSAD Young and Independent Investigator Award, the Distinguished Medical Research Lecturer Award from the UBC Faculty of Medicine, the Mogen Schou Award for international education and advocacy on bipolar disorder from the International Society for Bipolar Disorders (ISBD), and the Gerald L Klerman Award from Depression and Bipolar Support Alliance for his significant contribution towards advancing causes, diagnosis and treatment of mood disorders.

A dedicated clinician-scientist, Dr. Yatham is also the Regional Head of Psychiatry and Regional Program Medical Director for Mental Health and Addictions at Vancouver Coastal Health and Providence Healthcare. He has held leadership positions for national and international professional organizations including the President of the International Society for Bipolar Disorders, the Secretary for the World Federation of Societies of Biological Psychiatry (WFSBP), and he is now the President-Elect of the WFSBP.

The Colvin Prize for Bipolar Mood Disorder Research will be presented to Dr. Yatham during the Brain & Behavior Research Foundation’s 31st International Awards Dinner on October 26, 2018 in New York.