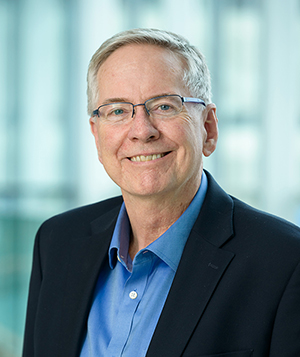 Microglia are the brain’s immune cells, and they work together to maintain brain health and remove “junk” that builds up in brain tissue. They are the brain’s tiny helper cells, and changes in their appearance can indicate degeneration or disease in surrounding cells and tissue.

In the past, microglia were thought to be inactive unless called upon by threat or injury. In recent years, researchers led by Brian MacVicar, professor in the faculty of medicine’s department of psychiatry and co-director of the Djavad Mowafaghian Centre for Brain Health, have shown that microglia are constantly active, extending and retracting their processes as they surveil and respond to their environment.

New research from L.P. Bernier, a research associate in MacVicar’s lab, expands our understanding of microglia morphology. Bernier and colleagues found that microglia have filopodia – thin structures that extend from the processes and enable microglia to sense alterations to their environment in nanoscale.

“Think of microglia processes like arms protruding from the cell,” explains Bernier. “Arms don’t have fine motor skills and are inefficient at probing dense environments like the brain. Filopodia are like fingers that allow microglia to move with greater precision to find and eliminate threats to brain homeostasis.”

Bernier and his team’s findings are microscopic in size but significant in scope. Microglial filopodia are a novel discovery, and they seem to increase microglia function by allowing an even greater range of surveillance. Filopodia have been described in other cell types, but in microglia they appear to be critical for cell-to-cell interaction, communicating changes in brain chemistry to activate resting microglia.

“Microglia are continually changing in response to their environment and we found that filopodia – thin, hair-like structures at the end of each microglia ‘arm’ extend and retract continuously,” explained Bernier. “They appear to be very different from the cell body and larger structures, acting in a random sensing motion to probe for changes to their surrounding cells and tissue.” 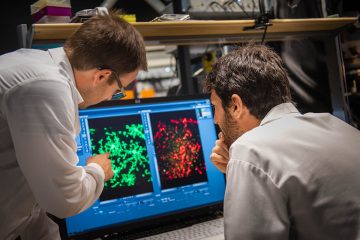 Changes in microglia have been implicated in a range of psychiatric and neurodegenerative disorders, from autism spectrum disorders and schizophrenia to Alzheimer’s disease and other dementias. The discovery of a new function of the cell may drive our understanding of what happens to microglia in disease. It is still not clear what role these cells play in disease pathology and whether under certain conditions they respond to or are vectors of critical changes in the brain.

“For microglia and their filopodia to effectively monitor their environment, they rely on cAMP signalling for range,” said Bernier. cAMP signalling is one of the most ubiquitous signalling systems in non-neuronal cells. Disrupting cAMP signalling impairs microglial surveillance range, reducing the effectiveness of these cells in detecting damage in surrounding cells.

“We’re excited to see that cAMP signalling seems to be a major regulator of the function of these cells, and that even though there’s lots of communication between microglia and their neighbors, microglia also have their own intrinsic way to efficiently surveil their environment,” said Dr. Bernier. “Knowing how microglia and their surveillance behavior are affected by changes in the brain will be important to understanding how they sense damage and repair the brain under stresses including stroke, injury, and neurodegenerative diseases.”