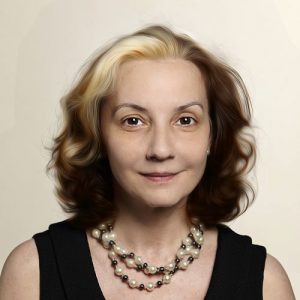 Dear Faculty, Staff, and Students of the UBC Department of Psychiatry,

I am thrilled to announce that Dr. Sophia Frangou will be joining the UBC Department of Psychiatry as a full-time academic faculty member at the Professor level as of October 1, 2019.  Earlier this year, Dr. Frangou was selected to be the holder of the UBC President’s Excellence Chair in Brain Health, resulting in her recruitment as a tenured Professor in the Department. The UBC President’s Excellence Chairs were created in order to recruit preeminent academic leaders at the forefront of their respective fields.  With her cutting-edge research program and global collaborative networks, Dr. Frangou is one among these distinguished leaders, and we are very excited to welcome her to the Department and the University.

Dr. Frangou is an internationally prominent clinician scientist whose focus has been to uncover pathophysiological processes underlying psychosis, with emphasis on schizophrenia and bipolar disorder using clinical, genetic, cognitive, and neuroimaging techniques.  Her pioneering research has had a major impact in a number of areas.  In 2002, Dr. Frangou published a comprehensive review of the significant and persistent cognitive impairment observed in bipolar disorder, a work which has been acknowledged as heralding a major shift in how the field viewed cognitive deficits and their clinical ramifications.  More recently, in investigating the neural pathways associated with disease expression, risk and resilience in bipolar disorder, Dr. Frangou introduced the concept of resilient adaptation, or adaptive neuroplasticity associated with resilience to psychopathology despite expressed genetic predisposition, providing a new avenue for future studies into the biological mechanisms for resilience and prevention of disease expression in bipolar disorder. Her current research investigates the pathological mechanism underpinning psychosis, and the mechanisms translating genetic risk to clinical phenotypes, in order to improve treatment through the specification of causative biological pathways.

Dr. Frangou completed her MD at the University of Athens Medical School in 1989, followed by her Master’s Degree in Neuroscience at the University of London in 1991. From 1990 to 1995, Dr. Frangou trained as a psychiatry resident at Maudsley and Bethlem Royal Hospitals in London, then in 2002, she completed her PhD in Psychiatry at the University of London. In 2005, she obtained her Certificate of Completion of Specialist Training in Psychiatry as well as entry onto the Specialist Register maintained by the General Medical Council, UK.  Dr. Frangou has been a Professor of Psychiatry in the Department of Psychiatry at the Icahn School of Medicine at Mount Sinai in New York since 2013, and prior to this, she held the post of Reader (equivalent to Professor) at the Institute of Psychiatry, King’s College, London, from 2002 to 2013.

The Department is very fortunate to have secured the recruitment of Dr. Frangou, and we are confident that, as a member of our academic faculty, she will not only bring world-class expertise and innovation to our learners, but will also make important contributions to our scientific research community which will advance the UBC Department of Psychiatry as a leading-edge centre for mental health research and training.

Please join me in warmly welcoming Dr. Frangou to Vancouver and to our academic community. We will strive to support Dr. Frangou in her pursuit of continued achievement and success here at UBC.