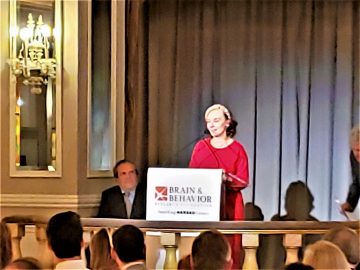 The prize recognizes Dr. Frangou’s impactful research, which has greatly advanced the understanding of the pathophysiology of bipolar disorder, particularly in relation to genetic and familial risk. She has made groundbreaking contributions to the characterization of brain mechanisms of resilience in those at high familial risk for bipolar disorder.

The Colvin Prize was established in 1993 and was formerly known under the successive titles of the Selo Prize, Falcone Prize and Bipolar Mood Disorder Prize. The prize was renamed in 2012 in honor of the late Oliver D. Colvin, Jr., a great benefactor of the Brain & Behavior Research Foundation who left the largest single contribution in the Foundation’s history. This prize carries an award of $50,000 and the winners are honored at an international dinner held each year. Previous Colvin Prize winners from our Department include Dr. Lakshmi Yatham, Professor and Department Head, who was recognized in 2018.

This year, the UBC Department of Psychiatry congratulates Dr. Frangou for receiving this extraordinary honour and recognition!

Save the Date: Dr. Frangou’s President’s Excellence Chair in Brain Health Lecture to take place on Tuesday December 17th from 3:00pm to 4:00pm at DMCBH. Dr. Frangou will be presenting on “Brain Mechanisms of Resilience to Psychopathology.” Further details to come.