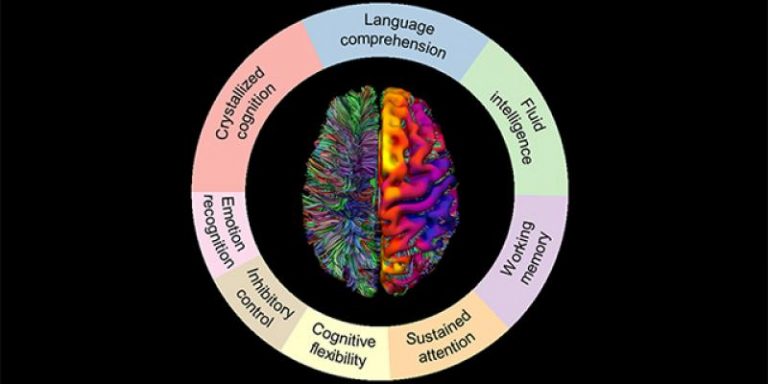 An analysis of more than 1,000 brain scans from healthy individuals discovered fundamental rules for how connections between brain regions regulate brain functions. The research team used advanced computational methods to define the “controllability” of each brain region, meaning the degree of control each region exerts on all others. They discovered two types of brain regions; those with multiple and flexible connections exerted greater control on higher-order processes (such as memory, attention and emotion) while those with more limited and fixed connections exerted greater control over specialized sensory and motor processing. These findings offer new insights on how the brain and mind are linked that could ultimately open new avenues for promoting healthy function.

Our thoughts, feelings, and actions arise from intricate interactions between brain regions.   A major challenge for modern neuroscience is to discover the rules for how these interactions regulate brain function.  Addressing this challenge is part of an ongoing collaboration of a team of researchers at the University of British Columbia, the Icahn School of Medicine at Mount Sinai, the Harvard Medical School and the University of Pennsylvania.

The team analysed diffusion weighted MRI brain scans together with genetic and cognitive data from 1066 healthy men and women participating in the Human Connectome Project. They mapped the connections of each brain region to all other parts of the brain and used computational models to estimate regional controllability which is a measure of the control each brain region exerts on all others based on its connectivity profile. Brain regions could be distinguished in two types based on their controllability. Regions with many and flexible connections were primarily located within higher-order brain networks involved in a wide range of complex attentional, memory and emotional processes. Those with few and fixed connections could be primarily found within networks supporting more circumscribed sensory and motor processes.  Moreover, brain regional controllability was heritable, meaning that genetic factors have a direct bearing on the brain-mind relationship.

According to Dr. Sophia Frangou, lead study investigator and President’s Excellence Chair in Brain Health at the Djavad Mowafaghian Centre for Brain Health, these findings have implications for brain function in health and disease. It would be possible to promote healthy brain function during development and ageing by targeting brain regions with high controllability. Conversely, damage to brain regions that control multiple functions will be expected to lead to wide-ranging problems while damage in regions that control more limited function is like to cause more specific abnormalities.

The team will continue and extend their collaborative work into two complementary directions. They plan to study large samples of healthy populations to understand how environmental factors may influence brain controllability across the lifespan. In addition, they plan to test how changes in regional brain controllability may give rise to mental health problems and use this knowledge towards developing targeted interventions.