Faculty of MedicineDepartment of Psychiatry
» Faculty of Medicine » Home » 2020 » January » 31 » Dr. Steven Taylor Interviewed by CTV, CBC, Huffington Post and National Post For His Expert Take on Reactions to 2019-nCoV in Canada and Abroad

Dr. Steven Taylor Interviewed by CTV, CBC, Huffington Post and National Post For His Expert Take on Reactions to 2019-nCoV in Canada and Abroad 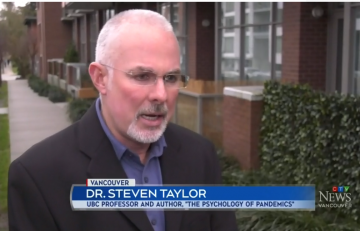 Dr. Steven Taylor, Professor in the UBC Department of Psychiatry, was interviewed this week by CTV News, CBC Vancouver, and Huffington Post for his expert take on the public’s response to new cases of 2019-nCoV in Canada. Dr. Taylor, a clinical psychologist and researcher in health anxiety, OCD and panic disorders, has recently authored a book titled The Psychology of Pandemics: Preparing for the Next Global outbreak of Infections Disease (Cambridge Scholars Publishing, 2019), which explores psychological factors related to the spread of infectious disease, such as those being observed with this current global outbreak.

While Dr. Taylor believes that some degree of concern is reasonable, he states, “It seems like quite a lot of people are reacting with excessive anxiety… People are going to start misinterpreting ordinary coughs and colds as signs of potential infection. Some people avoid going to work or public transit and that can create problems. It can also lead to an increase in racism and xenophobia.”

Temporarily referred to as 2019-nCoV by the World Health Organization, but now described by various news and media outlets as “Wuhan Flu” or “Wuhan Coronavirus,” the current outbreak needs to be appropriately named so that it accurately imparts information about the disease, while avoiding singling out ethnic or racial groups, geographic locales, trade and industry groups, or negatively impact animal welfare, experts say. According to Dr. Taylor in his interview with the Huffington Post, “(T)he longer the WHO waits before they come up with a conventional name that people use, the greater the risk that they’ll lose control over naming it… There are all kinds of complexities that need consideration.”

On February 5, 2020, the National Post reached out to Dr. Taylor for his views surrounding the 14-day quarantine of a cruise ship that arrived in Yokohama port, on which there are 251 Canadians on board and 10 passengers who tested positive for 2019-nCoV. “We’ll probably see an increase in people who are frustrated, anxious, irritable and perhaps we will see an increase in unruly behaviour as time goes by,” he said, such as people refusing to adhere to the quarantine. Dr. Taylor adds that, in addition to providing timely updates, the cruise ship should increase, as far as reasonably possible, the degree of control people can exert over their food or space. “If there is a way they could let them out for exercise periods, for example, that would be immensely beneficial for helping people manage their stress levels.”