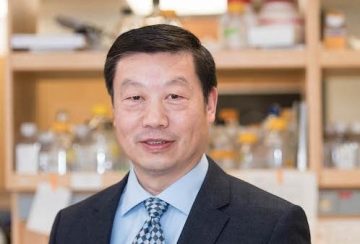 UBC Psychiatry Professor Dr. Weihong Song and his lab, along with researchers from the Central South University (CSU) in China, have for the first time identified a gene that increases the risk of Alzheimer’s disease. In their study, led by Dr. Xinxin Liao by who completed a joint PhD at UBC and CSU, the researchers found two mutations in the gene endothelin-converting enzyme 2 (ECE2) which impaired its ability to break down amyloid beta protein. These mutations were present significantly more often in people with Alzheimer’s than in controls—suggesting that the genetic variants in ECE2 could be causing, or at least contributing to, Alzheimer’s symptoms.

“Since amyloid beta protein is unique to Alzheimer’s disease, the majority of drug development was targeted here,” says Dr. Song, who is the Canada Research Chair in Alzheimer’s disease, Jack Brown and Family Professor, and director of UBC’s Townsend Family Laboratories. “If we can prevent amyloid beta protein build up or at least find a way to get rid of some of it, we could prevent and treat the disease.”